Love, Our Only Weapon To Change The World 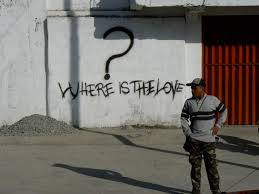 I know it’s been long since I last posted, like, literally over four months now and I’m sorry. Lately, I’ve been busy trying to figure out a bunch of stuffs for myself and the good news is, I have four more posts still pending or on my draft list. Isn’t that amazing? Yeah, don’t worry… You don’t need to tell me, I already know it’s gonna be amazing as always and believe me when I type you will love it ’cause I’m lovin’ it thus far. What’s up, family? what’s up y’all? I’m gonna be very informal and relaxed today, but it’s just gonna be temporary(Just for this paragraph) though. LOL! That said, back to what’s up.

Friends, I sometimes ask myself how often do we mean the words we say… I wonder how much love we hold in our hearts that can set the world ablaze. We live in an era filled with so much hate and violence that we easily lose touch with who we are, our true identity, if we aren’t careful. How do we respond to hate occasionally thrown at us? Do we respond with hate? Think about a world where hate is responded with more hate… Do we remain silent about it like we don’t care? Remember Martin Luther’s quote, “Our lives begin to end the day we become silent about the things that matter.” How much more hate do we harbor in us, and how long are we going to keep storing it inside us that we’re gonna use it to destroy our very own beautiful world right before our eyes? Why destroy our beautiful soul, that’s meant to love everyone, with evil? There are so many broken souls around us, and it doesn’t take much to love someone, for we don’t even have to even look very much further to find them; they’re just right beside us, in our backyard, and in front of us. There are many out there who are hurting and in dire need of love, but we can’t channel this love to those in need simply because the spirit of loving and caring for our neighbors is absent. How sad it is! I have a story to share with you.

Last night(Friday, August 09), I came across a Southern Caucasian male who was filled with so much hate that the hate itself was so vile. He also made several posts on vine(and other social media apps) that attracted too much attention to minorities who then left mean and hateful comments in return. Have it in mind that one of the things I detest with all my heart, body, soul and passion, and don’t even like talking about is racism or anything that pertains to skin color. There is nothing I abhor so much more than racism. This dude kept making mean and derogatory comments that got me heartbroken, to know certain things that prevailed in the twentieth century still live on in the twenty-first century, in this present day and age. He repeatedly insisted he was different from Hitler and an anti-Nazi, but kept on saying if he had the chance, he would burn, kill or destroy all African-Americans, Asians, Hispanics, Jews and Native-Americans. He reiterated he was a pro-KKK and firmly advocates their actions. Many of his friends and followers on social media reproached him, and fired back mean and distasteful comments at him. Friends, if there were words in the dictionary that could fathom my thought and express my emotions at that time, I would use them because broken and bruised are just understatement. They can’t give you a complete picture of what I felt. At first, I was filled with so much anger and strife that I was tempted to reply with hate, but then I thought about The Greatest Commandment in Mark 12:31 we, Christians, ought to live by, “Love your neighbor as yourself”, and Leviticus 19:18, “Do not seek revenge or bear a grudge against anyone among your people, but love your neighbor as yourself. I am the Lord.” Then, I thought about the legacy I want to leave behind when God calls me home, one of unconditional love and affection to all people I come across on this journey of life. Besides, I felt it was my chance to give love to my enemies even if I don’t get it back in return. In response to these statements, I just said to him, “But who taught you how to have so much hate towards people of skin color different from yours? What reason do you have for the intense hate, harsh and cruel words? What do you gain by repeatedly spewing vile and offensive statements, later expecting to be loved by those around you.” Furthermore, I went on to say, “God loves everybody regardless of skin color, and will not judge us based on it. You can hate me for being black and for being who I am, but no matter what, I love you so much with all my heart, brother, and will always do. I’ll be praying for you.” As I gently and softly uttered these words at him, I never knew they had the power to melt his heart. He replied back the following morning, saying, “You sir, are a strong person, no hate on you. You’re a good man.” I was very happy to get those words from him. To my greatest surprise, he took a step further and took down the posts he had made concerning race and killing all blacks, and apologized for hurting those around him too. I was very impressed, for I couldn’t believe what had just happened. I’m not saying this to bring glory to myself, but to Him who sent me here on earth and deserves it most, God.

Friends, love is for the strong. It’s hard to love those who don’t love you, but we have to. Christ loved everybody with no exception: the brokenhearted, the rejected, the sinners and all who weren’t considered worthy of being loved. Each and every day, I pray always that God would give me the grace to love unconditionally without expecting love. In a revolution of love we want to bring here on earth, we’re already doing it. We don’t need bombs, we don’t need warfare, we don’t need guns… Our only weapon is… LOVE. I can’t conclude without this quote from MLK, “Hate is too great a burden to bear, I stick to love.”